Sarah studied Biblical Studies at Cairn University, apologetics at the Oxford Centre for Christian Apologetics in Oxford, England, and is pursuing an MA in Bioethics from Trinity International University. Her desire is to connect apologetics with everyday life and the joy of knowing God. Sarah's hobbies include reading, cheering loudly while watching college sports, laughing with friends, and playing whatever imaginative game her young niece comes up with. You can read more of Sarah's writings at www.pennyofathought.wordpress.com and follow her on Twitter @pennyofathought

The Prosperity Gospel gets a lot of hype – both positive and negative – in evangelical circles. Let’s be honest, who doesn’t want to believe that Jesus wants us to have our best life now or that by trusting him all of our problems will disappear? Who doesn’t want to pay their bills, have a nice house, be healthy, or live in peace? Many Christians have experienced the physical blessings of God in Christ, and that is something to rejoice over and sing about.

Yet is this prosperity truly the focus of the Gospel message? Is this what Jesus came for; is it why he died? The theology of the prosperity gospel has always bothered me intellectually, but recently is has also angered me experientially, sounding like a clanging cymbal in the midst of difficult circumstances. It has been the joining together of theological reflection and experience that has caused me to take seriously the danger which the Prosperity Gospel presents. There are five key areas where I see this gospel being theologically and experientially untenable, undermining the true beauty of hope in Christ. END_OF_DOCUMENT_TOKEN_TO_BE_REPLACED

This past weekend Man of Steel, the latest revamp of Superman, opened with great box office success. Having just returned from seeing the film I can say that I highly enjoyed it, both as a story and for its visual effects; though there were a few moments too corny for my taste.

Yet spectacular special effects and cheese aside, what intrigued me the most about the film were the rumors of strong Christological and biblical themes woven throughout the movie. One pastor has said, “When I sat and listened to the movie I actually saw it was the story of Christ, and the love of God was weaved into the story.” END_OF_DOCUMENT_TOKEN_TO_BE_REPLACED

For as long as I can remember I the world of Narnia has captivated me. I have read the story of the Pevensie children and those that came after them literally hundreds of times throughout my childhood and into my adult years. I was the girl who consistently checked the back of her closet (I didn’t have a wardrobe) with the hope that I would meet Aslan or enjoy afternoon tea with Mr. Tumnus. I would offer up a brief prayer to God, reasoning that if he could do anything he could send me to Narnia, and then plunge behind my clothes. Sadly, I never got through, but I never gave up trying either.

As I grew older I discovered that the author of the Chronicles of Narnia, C.S. Lewis, wrote many other books, both fiction and non-fiction. Lewis was already my friend through Narnia, and I grew to appreciate him on a deeper level as I read his other works, such as: Mere Christianity, The Space Trilogy, An Experiment in Criticism (less popular, but one of my favorites), God in the Dock, and Miracles. Lewis quickly became my literary hero. He communicated in ways that resonated with my intellect and my imagination.

It came as no surprise that when Alister McGrath – one of my apologetic heroes – chose to write a biography on C.S. Lewis entitled C.S. Lewis: A Life, I waited eagerly for its publication and then for my copy to come in the mail (thanks Amazon). Having studied under McGrath in Oxford – Lewis’s long-term and my short-term home – made my excitement all the more palpable. Into my hands in Wisconsin came a book about one of my favorite people, written by one of my favorite people, located predominantly in my favorite city. END_OF_DOCUMENT_TOKEN_TO_BE_REPLACED

Awhile back I was amused to see that the BBC had a news story entitled, No evidence of mermaids, say US government. According to the article, a broadcast on mermaids, which was a work of fiction, was mistaken as a documentary. This led to people questioning if mermaids actually existed, and the National Ocean Service stating, “No evidence of aquatic humanoids has ever been found.” While mermaids have been a part of mythology across the centuries and in various cultures, they are nothing more than characters in ancient stories.

Of Mermaids and God

It hardly seems newsworthy to point out that there is no evidence of “aquatic humanoids.” Obviously they’re a work of fiction, a myth! Yet the more I thought about it the more I realized that this is the same way many people approach God’s existence – it’s outrageous. I can almost see an article saying, “No evidence of a Supernatural Being has ever been found.” He’s a myth that’s been passed down through the centuries. He’s just a character in an ancient story.

But is this the case? Is there “no evidence of God?” Is the belief in God similar to the belief in a mythical aquatic humanoid? END_OF_DOCUMENT_TOKEN_TO_BE_REPLACED

My niece has reached the age where she can distinguish between telling the truth and a lie. Like most four-year-olds, she has tested the waters  as she learns to navigate the trajectory words have on life. This has led to both serious discussions on why it’s important not to lie, and humorous moments as I’ve watched her process those lessons, applying them to her actions and to the actions of others.

Now, when my niece is uncertain about something I say, she will ask me, “Are you true?” I love when she asks this question; not only because it shows she’s learning to think critically and to seek the truth, but because there is a deeper question being asked, one  she’s not even conscious of raising. END_OF_DOCUMENT_TOKEN_TO_BE_REPLACED

Religious Pluralism has become common in our daily lives. Not only do we live in a religiously diverse nation, one that claims to uphold each individual’s right of choose their faith, we also live in a culture that has adopted the belief that all religions are fundamentally the same.  I’m daily confronted with the reality that many people believe all religions are true, teach the same thing, and lead to the same place.

Yet any serious student of religions will quickly be able to see that religious pluralism as a belief system is contradictory and cannot sustain itself. Religions that make contrary truth claims on everything from the nature of God, the material world, morality, humanity, and eternity cannot be fundamentally the same; it’s impossible. Also, to claim that all religions are equal in their beliefs is to misunderstand and misrepresent the rich variety of religious observance.

Still, the belief that “all roads lead to Rome” is prevalent and for the Christian poses a unique challenge. How do we communicate what we believe, and why we believe it, in a way that remains true to the message of the Bible and at the same time respects the diverse worldviews that surround us? As I have thought through this question, I believe there are four principles that can help Christians explain their faith graciously in a culture that promotes the worldview of Religious Pluralism. These principles form the acronym DARE END_OF_DOCUMENT_TOKEN_TO_BE_REPLACED

Thanks to the History Channel I discovered that on this day, April 12, 1633:

Italian astronomer and physicist Galileo Galilei [went] on trial in Rome for challenging Church orthodoxy, postulating that the Earth revolves around the sun. Chief inquisitor Father Vincenzo Maculano da Firenzuol found Galileo guilty of heresy. The astronomer spent the remainder of his days under house arrest.

If you’ve spent any time around the debate between science and religion, you’ve heard this story at least once. We’re told Galileo was a man whose scientific discovery went against the backward understanding of the Church, which led to his persecution. The problem is that this is not the full story and twists what really happened in unnecessary ways. It is unfortunate that the History Channel has decided to go along with the partial story, and not the full story. END_OF_DOCUMENT_TOKEN_TO_BE_REPLACED

Living in the Midwest, the first days of spring, when the temperature stays above 40 degrees two days or longer, is a time of celebration. Coats stay in closets and t-shirts come out of drawers, while children and adults take advantage of the fresh air that won’t cause frostbite. 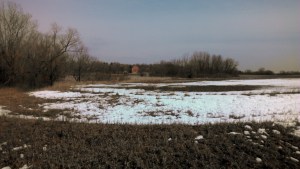 But this morning, as I went for the first of many warmer weather walks, the same mixed emotions that I experience every year at this time came upon me.  The beginning of spring has always been a time of joyful anticipation and deep frustration for me. The rising temperatures and brighter sun awaken the hope and excitement of life. Soon everything will be green; flowers will be blooming; the sky will deepen to a cheerful blue that will eventually transform into a warm haze. But none of this has taken place… yet. The ground is still frozen; everything is still lifeless. The world is still draped in the browns, grays, and dreariness of death. And this always depresses me. I long for life, but instead I’m confronted with decay. END_OF_DOCUMENT_TOKEN_TO_BE_REPLACED

This past Christmas I received a Kindle (thanks Mom and Dad), and the first book I chose to read on it was Why Trust Jesus? by Dave Sterrett. I was not disappointed with my choice. It is an excellent book, so imagine my excitement when I discovered that it is free on Kindle during Holy Week (the week between Palm and Easter Sunday).

In Why Trust Jesus? Dave looks at common intellectual and experiential questions we all have on Jesus’ reliability. The subtitle of the book summarizes this well: “An honest look at doubts, plans, hurts, desires, fears, questions, and pleasure.” Why should we trust Jesus in the midst of competing ideas, ideals, and emotional options? END_OF_DOCUMENT_TOKEN_TO_BE_REPLACED

For the past three weeks I’ve turned on the History Channel with over 68 million viewers to watch The Bible. The mini-series produced by Mark Burnett and Roma Downey has taken Hollywood by storm; it has surprised millions with its popularity; and it has caused the religious to stand up and cheer that the sacred is getting a in positive portrayal. As one review put it, “This time, Hollywood got it right.” Yet in the midst of all the positive hype there are some who have held back their praise, frustrated or downright upset with how it is interpreting the biblical narrative.

This has left me with the following question: did Hollywood get it right, or is this min-series an interpretive failure? Whether you are a Christian who is familiar with the narrative of the Bible or someone newly exposed to its stories, this is an important question. The Bible makes extraordinary claims about its authority and the priority it should have in our lives. For example, 2 Timothy 3:16 states:

All scripture is breathed out by God and profitable for teaching, for reproof, and for training in righteousness.

Knowing this first of all, that no prophecy of Scripture comes from someone’s own interpretation. For no prophecy was ever produced by the will of man, but men spoke from God as they were carried along by the Holy Spirit.

Therefore, it seems only right that we move from passive TV watchers to evaluating if The Bible series is worthy of our praise. Rather than go into all of my reasons for or against the series, I’d like to suggest three discretionary tips for your consideration as you continue to watch this series unfold. END_OF_DOCUMENT_TOKEN_TO_BE_REPLACED